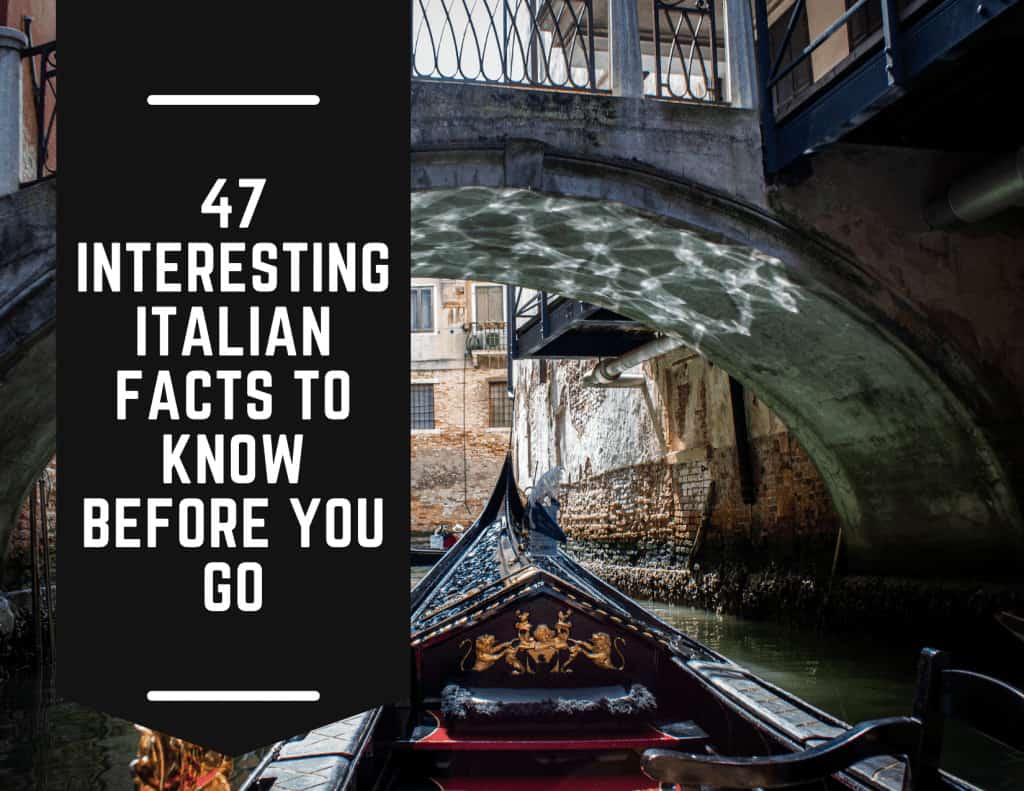 Italy. A land of beauty, culture, and history. Italy is often called “Il Belpaese” which translates to “The Beautiful Country”. The people are welcoming, the food is rich and flavorful, and the culture is deeply rooted in history. There’s something for everyone in Italy!

We have compiled 47 interesting Italian facts that you must know before traveling to visit this land of sensory explosion.

Important Facts About the Italian Language

1. Italian is the official language of Italy.

2. The Italian language has its origins from the Latin language which evolved into Italian over time – this is why Italian words often resemble Latin ones!

3. The Italian government made a rule in 1996 requiring all children learning Italian at school or elsewhere to learn proper pronunciation rules while speaking instead of just memorizing common phrases such as “ciao” (which means bye-bye). Today, there are over 50 million people around the world who speak Italian either professionally or daily! This makes it one of the top five most popular languages in the world!

5. Ancient Romans spoke Latin and spread it throughout Europe which led to Romance languages like Italian, French, Spanish & Portuguese being derived from Latin roots/vocabulary.

6. Italian is also one of the 24 official languages in Switzerland and San Marino.

7. Italian is the unofficial language spoken by many people in Vatican City.

8. There are around 90 million Italian speakers worldwide.

9. It is also the second most studied language in school after English.

10. There are Italian-speaking communities around the world, mainly because of Italian immigration to these countries.

11. The first official dictionary was written by an Italian man named Niccolò Tommaseo back in 1842.

12. Many dialects were spoken around Italy until unification took place in 1860. The National Fascist Party of Italy made Italian the national language and started a campaign to extinguish all dialects.

Important Facts About the Italian Flag

14. Each color on the Italian flag has a specific meaning attached to it: Green represents hope; White symbolizes faith; Red stands for charity or blood (depending on interpretation).

15. The Italian flag was originally created after Napoleon returned from his Egyptian campaign but wasn’t officially adopted until 1946 – over 100 years later!

16. The Italian flag is flown throughout Italy on special holidays.

Important Facts About the Italian Cuisine

17. Olive oil holds a very special part in Italian culture as well – it’s considered an Italian staple food item after bread and pasta! It comes from olive trees and Italian olive oil is considered one of the best in the world because it’s made using a specific technique to protect its flavor and nutritional content.

18. It takes approximately ten years for an Italian Olive Tree to produce olives!

19. There are over 250 variations of pasta throughout Italy with different shapes and sauces depending on the region.

20. A common misconception about Italian food is that it must be cooked with copious amounts of oil to taste good. Italian cuisine is all about fresh ingredients – not excessive use of oil!

22. Italians drink 13 gallons of wine per person annually. That’s a lot of vino!

23. Italian food is flavorful, unique, and full of life due to the use of fresh ingredients instead of additives or preservatives in their recipes.

24. Food plays an important role in Italian culture; it brings the family together at mealtimes which are typically prepared for by women (mamma!) every day after they get home from work/school since Italian society puts importance on sharing meals with your friends & family. This creates strong bonds between those who share food.

25. Italian cuisines depend on the region of Italy you are visiting – there is a variety of regional Italian dishes!

Important Facts About the Italian History

30. Italy is known as the cradle of Western civilization. Italian history goes back to pre-Roman times – yes, there were many Italian empires!

32. The Etruscans who lived around Rome before the rise of Ancient Rome built underground tunnels called ‘grottos’ where they buried their dead with valuables for use in the after-life.

33. Ancient Rome was the birthplace of Western Civilization.

34. The Roman Empire held Europe & Northern Africa together for hundreds of years and this allowed trade, travel, technology, language (Latin), etc to spread throughout these regions which all later influenced Italian history after they fell.

35. Italy has been invaded by various groups over its thousands-year-old history including The French under Napoleon Bonaparte in 1805 AD who ended up overthrowing the Italian government at that time before being defeated by an alliance between Russia/Austria/United Kingdom led by Lord Horatio Nelson himself!

36. Italian people are said to have betrayed Italian physicist, inventor, and engineer Galileo Galilei by renouncing his theory of heliocentrism in favor of the Church’s geocentric model.

37. When Pope Pius XII passed away in 1958, he was given a state funeral by Italian President Giovanni Gronchi with members from all around Europe attending this public service which also included over 100 cardinals representing various countries. The Italian government declared three days of national mourning during that time period as well. He became known as “the people’s Pope” since they were able to see him on tours visiting Catholic communities throughout his life before becoming pope while still living out in the open among other Catholics instead of being hidden behind closed doors.

38. The Italian Peninsula is divided into 20 regions, 22 if you include the two autonomous regions of Sicily and Sardinia.

39. Sicily is an autonomous region of Italy, located within the Italian Republic’s territorial bounds along with Sardinia which makes up its own island in the southern Italian peninsula!

40. Sicily and Sardinia have a special administrative status, different from other Italian regions or provinces as they are not controlled by Rome.

41. The official languages spoken in Sicily and Sardinia include Sicilian and Italian but there are over 30 dialects also spoken here including Greek, Arabic, Catalan/Moorish Spanish, French, Norman French, etc. due to its history of being conquered by so many other countries!

42. Sicily was conquered by Arabs in the Middle Ages who brought new flavors to Italian cuisine along with Greek & Spanish influences.

43. The Italian peninsula was once divided into warring city-states until the Italian Unification movement took place which resulted in a unified Kingdom of Italy that later evolved into the Italian Republic after World War II!

Important Facts About The Italian People

44. Italian males were formerly obligated by law to serve at least six months in the military or pay someone to do it for them, but this regulation was abolished in 2004, shortly before compulsory conscription ended. Italian women previously had no right to vote until after WWII, and even then, they did not have equal rights with men for a few more years!

45. Italian family names are often formed from the place of origin, such as a city name or a province, profession/type of employment

46. Italian surnames typically come last like “Marinelli” or “Martinez” but can also be found as O’Brien/O Brien (Irish), MacLaughlin (Scottish), etc., since many Italians immigrated around Europe during earlier times to escape persecution and poverty only later returning home.

47. Italy also has a small population of nomadic Romani gypsies! The Italian government does not recognize them as citizens but acknowledges their presence through immigration laws that are much more lenient than other European countries like Hungary or Romania, where Roma communities have suffered persecution for centuries, including segregated living conditions and forced displacements ethnic profiling just because they’re different.